You Can’t Make This Stuff Up

Last week, a young man who loves body art AND his Pioneer headphones decided to combine these two passions into one tattoo.  He instantly uploaded a photo to Pioneer’s Facebook Timeline (company profile):

Within the first 17 hours, Tyler’s tattoo photo had received 87 Likes and 181 Shares.  Remember that each time you Like a photo or Share it to your page, it broadcasts to a portion of your Facebook friends and shows up in their New Feed and/or Notifications.  The more Likes, Share, and Comments a given photo gets on Facebook, the more likely it will show up in another’s News Feed.  Users can also adjust how they see Company Updates, as pictured below.

Later that same day, the administrators of the Pioneer Facebook Company page were smart to repost the tattoo photo to their Timeline, which pulled another 1,350 Likes, 55 Comments, and 182 Shares.   All from 2 mouse clicks.

Pioneer did not pay this young man to get a tattoo, nor did they have to pay a photographer to take his photo.  They did not hire a Public Relations firm to put out a press release on a wire service.  They did not host a photo contest on Facebook for the craziest tattoo. They could have promoted this post or used Facebook Ads, but my guess is that they didn’t pay Facebook anything to promote this post.  The buzz was all generated purely from social influence.

But it does not mean that Pioneer’s social marketing team was not doing their jobs.  On the contrary, I would say they were “all over it”.  With over 328,000 Company Page Likes, their strong social community was ready, willing, and able to share Tyler’s new tattoo as soon as he uploaded it, spreading the Love Of Pioneer all over the audio web. Oooo weeee, sticky icky icky!

Traditional marketing efforts do not resonate on social networks as well as social influences and peer recommendations. For example, a stock photo of these same headphones would not be shared to the same extent.

New social media apps like Spotify have featured songs and suggested playlists based on a given user’s music tastes, but its far more likely that a user will check out what his or her friends have listened to before listening to a promoted track.  Users can send individual songs to friends, share them to their profiles, and create custom playlists (much like mix tapes back in the day) that can be followed or even setup for collaboration.  Recommendations and updates show up in a user’s Inbox, without having to send the actual song files around in emails, etc.  Artists and song writers collect royalties based on the number of plays. 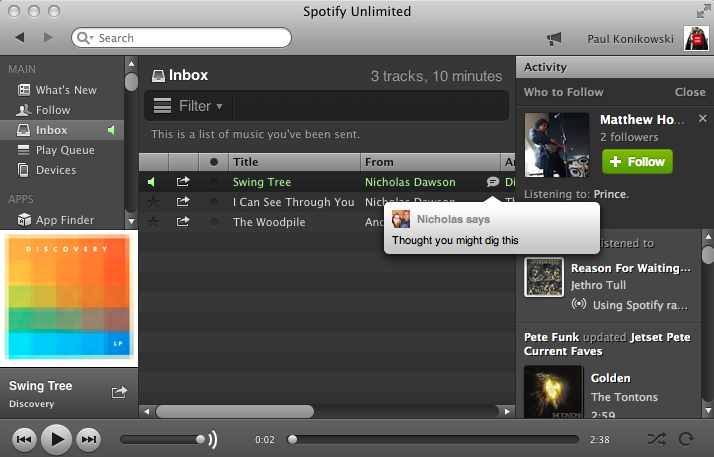 A few months ago, I was invited to a collaborative Spotfiy playlist, where various Spotify users share “new” music with the group, usually on Fridays.  There is an accompanying secret Facebook Group so that collaborators can easily share comments about songs and artists.  This also utilizes the Facebook Notify function on smartphones to let other Group members know there are new songs added to the playlist.

I can’t tell you how much I enjoy being part of this collaborative Spotify playlist, and how many new bands I have “discovered” from it. Although I only know two group members on a personal level, I prefer hearing “new” music from these group peers rather than commercial radio. I am not against radio, but most of the stations have been bought out by conglomerates who try to choose which music is going to be successful before it even gets airplay. If every radio station was still independently owned, we would have a lot more diversity in the music that we listen to, and a lot more faith in the station operators.

Imagine that: radio DJS that we could trust to introduce us to new music.  They should make an app for that.

Do you use Spotify or Facebook to Share music with your friends or followers?  Email me at pkav dot info at gmail dot com