Guest blogger Tavius Aiton has worked in audio and acoustics for the past decade, from design and sales, to project management. Tavius is owner of Architectural Acoustics in San Jose, CA.

The solution always begins with understanding the problem. Acoustically, client expectations and needs are defined most by the purpose of their space. Obviously, budget and materials finishes factors into the equation as well; but in critical listening environments, acoustics should drive the design and budget.

Acoustics are best handled in the design phase of new construction.  Any critical listening space should first be optimized for shape and size, defined by its intended purpose, speaker orientation and patterns, as well as listening positions. Often, noise must be contained within a space, as well as isolated from outside. Wall, ceiling and floor construction design are important for sound and vibration isolation issues from adjacent spaces.

In rooms with shared walls needing isolation, choosing the proper stud type and configuration are important. Often, more floor space is required as there is greater airspace and less connection points between the walls. Double stud, or staggered stud layouts are often considered along with insulation. Isolation clips can be applied on rails across the studs to further isolation.

Early incident reflections may be desired in many critical listening spaces, but this needs to be carefully considered, because too much reverberation reduces speech intelligibility and musical clarity.  Ideal reverberation times should be called out by consultants.  Absorptive materials, or porous materials, allowing flow resistance of sound energy, can reduce reflections by frequencies depending upon type of material, thickness and airspace or backing material.

Reflection can be important, especially in larger spaces. Early incident sound reflections can be redirected to listeners prior to the room “coloring” them due to longer reverberation times.  Often, sound energy is redirected specifically based on size, shape, and type of materials placed throughout the room. Diffusion, or even-scattering of sound reflections, can be a necessary consideration in controlling the sound level equality throughout a space and maintain sound integrity.

Critical listening spaces require many considerations.  The earlier an acoustical consultant is brought in on the job, the better.  Often this can avoid acoustical issues that may be difficult, or more challenging, and costly to consider later.  Its also important to have a qualified contractor to implement the consultants design criteria, by properly installing the acoustic treatments, and remaining within budget.

Often budgets include high end equipment, and little to no acoustical treatments.  This is another reason to hire the appropriate consultant from the start: to have all the acoustical requirements laid out and included in your budget.  Ensure the most affective and affordable solutions for your acoustical or noise reduction needs. Make the most of your critical listening space and the investment in time, energy, and capital!

I would be happy to recommend a consultant specific to your needs.

How Proper Acoustics Can Improve Productivity In Your Work Environment

Guest blogger Tavius Aiton has worked in audio and acoustics for the past decade, from design and sales, to project management. Tavius is owner of Architectural Acoustics in Palo Alto, CA.

Typically, the main problem with business office space is nurturing an environment that minimizes unnecessary distractions, promotes privacy, and ensures the quality of video conferences and phone calls. Today, we will discuss some of the most common acoustic challenges in business office environments, and how those challenges can be overcome.

Sound Masking:  Many offices are open plan, or cubicle style layouts.  Noise, especially conversations, can be distracting in this environment, disturbing a coworker’s concentration, focus, and productivity. Sound masking is a technology designed for open/ cubical style office spaces having typical lay-in drop ceiling acoustical tiles.  Speakers are tuned with a “pink” noise. This is slightly more towards the lower end of the sound spectrum than “white” noise, which can be perceived as a harsher tone.

These sound masking speakers are usually mounted in cans that are suspended from the roof deck within the plenum space in an engineered pattern. These units are oriented upwards so that the sound “mushrooms” above the acoustical ceiling and disperses more evenly throughout the office space. This effect makes office noise less noticeable and more of a background that becomes unconscious over time. 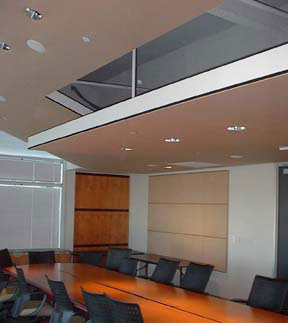 The advantage to introducing noise subliminally into an environment is that it raises the overall noise floor making changes in sound levels less variant, thus less noticeable or distracted.  Sound masking also increases speech privacy.  As the masking sound level is increased, ambient office noise become less clear at closer distances. This is especially advantageous in open/cubicle style offices spaces where many people are working together and sound isolation may be poor or nonexistent.   It has been shown that speech privacy in working environments can increase productivity.

Conference Rooms: Many conference room walls are not finished to the roof deck, and instead go only up to the drop ceiling tile grid. This allows sound, including private conversations, to escape into the surrounding work environment.  Lay-in drop ceiling acoustical tiles tend to be absorptive in nature, which allows sound to pass through them. This is why they do not make a good barrier for sound isolation.  Once walls are finished to the roof deck, a second layer of gypsum board can be added to the existing wall with a visco-elastic damping compound between for constrained layer damping.  Finish with a non-hardening sealant around perimeter and butt joints to maintain isolation of gypsum board from hard edges where sound vibration can more easily trespass.

Office doors are not usually fully sealed and can also allow a fair amount of sound leakage, adding to the issue of inadequate privacy.  Windows can allow sound trespassing as well, but typically add to the reverberation in a room like other reflective surfaces causing difficulties in speech intelligibility and music clarity, especially where amplified audio exists like audiovisual conferencing.

Many conference rooms are implemented with desk-top conferencing phones or ceiling microphones.  End users typically shy away from desktop microphones for fear of picking up unwanted noise made by articles being moved around the microphones, or brushing over them.  Speaker to microphone distance is one of the most important factors in achieving speech intelligibility.  Often, ceiling microphones are preferred by the end users, but these distances are greater than desired, causing issues with detecting the speaker’s signal loud enough for its clear transmission to the far side by picking up more of the ambient noise within the room as well.

Additional absorption can be considered in these environments to help reduce reflections and noise build up due to reverberation.  The amount of absorption is dependent upon existing finishes in the room, volume of the space, or desired reverberation time.

In conclusion, conference room walls should be installed to the roof deck, a second layer of gypsum board with a visco-elastic damping compound like Pinta Decibel Drop to achieve constrained layer damping.  Also, sound masking should be implemented in open or cubicle office spaces, and added absorption with audio amplified spaces such as audio/video conferencing rooms may be needed to get intelligible signals.