Timely.is Was Awesome While It Lasted

Today is a sad day in Social Media Land, at least for me it is.  That is because today, November 16, 2012, the website Timely.is is officially shutting down. No, that is not a typo in the previous sentence; the hyperlink for Timely really is (was) http://timely.is, not http://timely.com.  If you never used Timely, here is what it looked like:

Here is the official announcement from DemandForce.com:

Timely started as a fun side project back in 2010.
Since then it has grown to help tens of thousands of people publish millions of Tweets and Facebook updates.
We’re proud of that. And happy we could help you manage your hectic world of social media.
Unfortunately we haven’t been giving Timely much attention recently as we’ve been focusing on Demandforce‘s paid products.
So me, Assaf and David have made the hard decision to retire Timely.
Starting November 16th you will no longer be able to access your Timely account.
When we launched Timely almost 2 years ago there were no other tools that would automatically figure out the best time for a Tweet to go out.
Thankfully there are some great alternatives today such as Buffer or Hootsuite.
If you have any questions, let me know! Just reply to this email.
Thank you so much for being a part of the Timely story,
Ethan Bloch
Co-Creator of Timely

I have been a huge fan of Timely because of its simplicity and effectiveness.  Here is how it worked: a social media user (let’s say “you”) would sign up for a Timely account using your email address and connect your Twitter and Facebook Profiles (I personally only used it for Twitter).  You would then add tweets to your Timely queue, which would automatically shorten the links using your Bit.ly account, and then send out your tweets once a day (or 3, 5, or 9 times depending on your settings).

Timely would not tweet at the the exact same time every day, but somewhat random times during certain hours of the day when the bulk of your followers were online.  So, if you followers were more likely to be online around 8am Pacific, it would send tweets at 8:05, 8:12, 8:07, 7:59 and so on.  What was really cool about Timely was that it would adjust the post times based on the performance of the previous tweets (how many clicks, retweets, or other interaction each post got), resulting in a broader “reach”.  Timely would also allow you to post tweets instantly, so you could track the performance of all of your tweets, scheduled and spontaneous, all in one page. 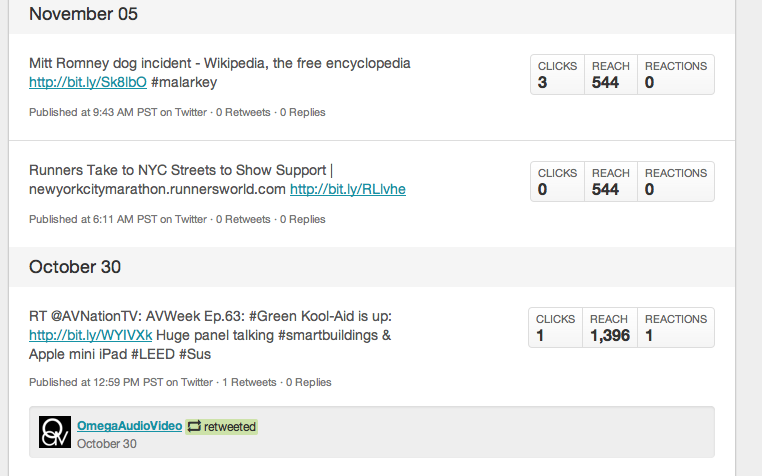 The basic, free version of Timely allowed you to connect up to five Twitter accounts, which was extremely helpful for folks like me who are managing (or should I say juggling) multiple social media profiles for different clients.  You could also invite other Timely.is users to contribute to your queue.

For example, I volunteer with a local non-profit called Sustainable Fairfax and help them with their social media.  I got them started on Twitter and setup a Timely.is queue to schedule tweets about upcoming events, green cleaning tips, and other sustainable news.  About once a week, I would “load up the Timely” with Tweets for the upcoming week.  This was extremely helpful when I had a business trip coming and I knew I didn’t have time to tweet every day on behalf of @SusFairfax.

More importantly, I used Timely as a way to let other volunteers add tweets to the queue.  Many volunteers were reluctant to sign up for a Twitter account, but with Timely, I could just invite them to contribute via email.  I could review the tweets they added to the queue and optimize them using proper hashtags and keywords, or rearrange the order of the tweets as needed.

As mentioned in the above announcement, there are lots of other ways to schedule tweets these days using Hootsuite, Tweetdeck, Buffer, even Facebook has a way to post “in the future”.  But none are as simple as Timely was, and they don’t work as well. I just started using Buffer and I am already disappointed because I have to pay the monthly premium of $10 if I want to link multiple Twitter accounts and Facebook pages.  Buffer calls it their Awesome plan.  I call it hella-lame:

Now, some of my readers may think scheduling tweets is in itself hella-lame because doing so misses a major point of Twitter which is interaction; I can completely appreciate this viewpoint.  These aforementioned tweeters are generally online all day with Tweetdeck or Hootsuite open on their desktop, constantly scanning the Twitterverse and interacting with Twitter friends, and tracking the performance of each tweet using fancy schmancy metrics tracking tools.  But most people just don’t have time for Twitter, at least not all day, every day, and Timely allowed them a simple way to tweet at least once a day and track their performance using simple metrics.  And now its gone, and I am a #sadpanda.

R.I.P. Timely, you will be missed.

Do you think its hella-lame to schedule tweets or Facebook posts in advance?  What aggregators and online tools do you use to make your Tweets more effective?  Please comment below, or send an email to me at pkav.info@gmail.com.  Thanks -pk