What A Long, Strange Concert It Was 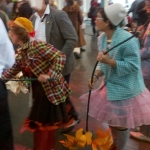 Last night, I attended Wavy Gravy’s 75th Birthday Boogie, an epic 6+ hour benefit concert for the Seva Foundation, featuring an all-star cast of classic California psychedelic rock bands. The event was held at the Craneway Pavilion in Point Richmond, CA.  As I drove into the heavily industrialized area with my buddy Andrew, I felt like I was somehow entering the album art of Pink Floyd’s Animals.

The Craneway Pavilion is housed inside the former Ford Motor Company assembly plant, also known as The Ford Richmond Plant.  The Pavilion itself is enormous, like an industrial cathedral, with over 45,000 square feet of mostly concrete floor, and huge glass windows looking out to a spectacular view of San Francisco.  With over 5000 concert goers in attendance, I heard that it was the first time the Craneway Pavilion has ever sold out since it opened in 2009.

The concert sound system consisted of a dozen line-array elements hung on either side of the stage, and a handful of delay speaker zones using wall mounted trapezoidal boxes.  Despite the well-engineered PA system and acoustic treatments, the show was plagued all night with feedback squeals.  Not sure who was to blame really, but if it was my event, I would start with the monitor engineer, but I’m not sure they even had a monitor engineer.  Luckily the crowd was patient (and rather intoxicated), and Wavy Gravy didn’t seem to mind, because it was all for a good cause anyway.

Its never easy being the first act at a benefit show, but Hot Buttered Rum didn’t seem to mind, as they opened the show with a dynamite acoustic performance.  The Ace of Cups (the original all-girl rock band) managed a heartfelt reunion set amongst almost constant feedback issues, followed by extended jams by the amazing guitarist Steve Kimmock and his band Zero.  The lineup continued with a soulful performance by The Chris Robinson Brotherhood, who were joined by Bob Weir from the Grateful Dead for one of Chris’ new songs, “They Love Each Other”.

It was getting close to midnight as Mickey Hart (also from the Grateful Dead) and Friends took the stage, including bassist Dave Schools of Widespread Panic, a nice surprise.  Wavy Gravy officially turned 75 at midnight as musicians repeatedly mouthed ‘I can’t hear anything’ to folks off stage left.  Around 12:30pm, about 50 hand drummers joined the band on the stage chanting Go Wavy something or other over an extended rendition of Santana’s Jingo.  The man of the hour was wheeled into the middle of the room on a giant hippie throne, parting the tye-dyed sea of hippies, as hundreds of polka dot balloons fell from the ceiling.  Ace of Cups led the crowd in a classic Happy Birthday sing-along to a Wavy Gravy who seemed to be overflowing with gratitude and positive energy.

Like any good acid trip, the benefit concert had it’s ups and downs, and the ending was really the best part.  Bob Weir closed out the show, playing Grateful Dead songs well past 2am, inviting many of previous performers to join him on stage.  My personal favorites were Tennessee Jed with Chris Robinson on vocals, and a very melodic Sugaree featuring Nicki Bluhm, leaving me wanting more as she left the stage.

The party continues later this month on the East coast, as Wavy Gravy’s Birthday Boogie comes to The Beacon Theater in Manhattan on Friday May 27, 2011.  I encourage my Northeast readers to check out this show if you can, its a great venue located on the upper west side.  The lineup is different, but with Ani Difranco, Bruce Hornsby, Dr. John, and Jackson Browne on the bill, I’m sure it will be just as fantastic.  My advice: wear comfy shoes, arrange an overnight babysitter, and get a room next door at the Beacon Hotel.  Trust me, it’s going to be a long, strange night.

Error: Twitter did not respond. Please wait a few minutes and refresh this page.